BY SUSANA VAL
Director of the Zaragoza Logistics Center

In the field of logistics — and transportation, particularly — the concept of “last mile” refers to the final leg of the delivery process when the goods are moved to the destination specified by the customer. It’s a crucial step in e-commerce logistics, as it considerably impacts costs and determines customer satisfaction.

Managing the last mile efficiently has always been a daunting task. This is because parcels — from the time they leave their last distribution point until they arrive at their delivery destination — are faced with numerous obstacles. Some of these impediments are related to transportation itself, while others stem from the type of product being delivered. All the same, nowadays, certain trends in the execution of last-mile logistics, such as the emergence of e-commerce, have painted an even more complex picture.

Urban freight distribution, also called the last mile, is the most critical part of the supply chain. It faces several challenges in the city environments, such as:

With regard to the last point, specifically, e-commerce has accelerated the growth of last-mile delivery worldwide. Spain is already the third European country with the highest turnover, with online sales of $69.4 billion. In 2021, during the Covid-19 pandemic, 76% of Spanish internet users said they made online purchases on a regular basis. That same year, European e-commerce overall grew by 13% to reach $730 billion. Consequently, this has driven huge demand for last-mile delivery.

To face all these challenges, companies are implementing innovative solutions that rely mainly on technology and infrastructure to deliver goods with minimum lead times, at the lowest cost, and as efficiently as possible. The most cutting-edge last-mile solutions combine data-intensive handling processes with route algorithms, sensors, artificial intelligence, and alternative fuels. They include new infrastructure elements such as electric vehicles (two- and three-wheelers, electric scooters, etc.), non-polluting vehicles, and new depots or small warehouses in urban areas, facilitating (de)consolidation activities and the routing of last-mile specialized urban fleets.

Smart lockers have emerged as a solution that integrates technology and infrastructure to facilitate a warehousing space for end users, making shipments more convenient from each stakeholder’s point of view.

Smart lockers are automated compartments in which people can receive and even return parcels and goods in a simple way with no need to coordinate a meeting time in advance. The solution makes it possible to lessen the environmental impact of the last mile in cities by reducing the number of miles traveled. Smart lockers are also useful for making consolidated shipments, optimizing the load factor of freight vehicles. 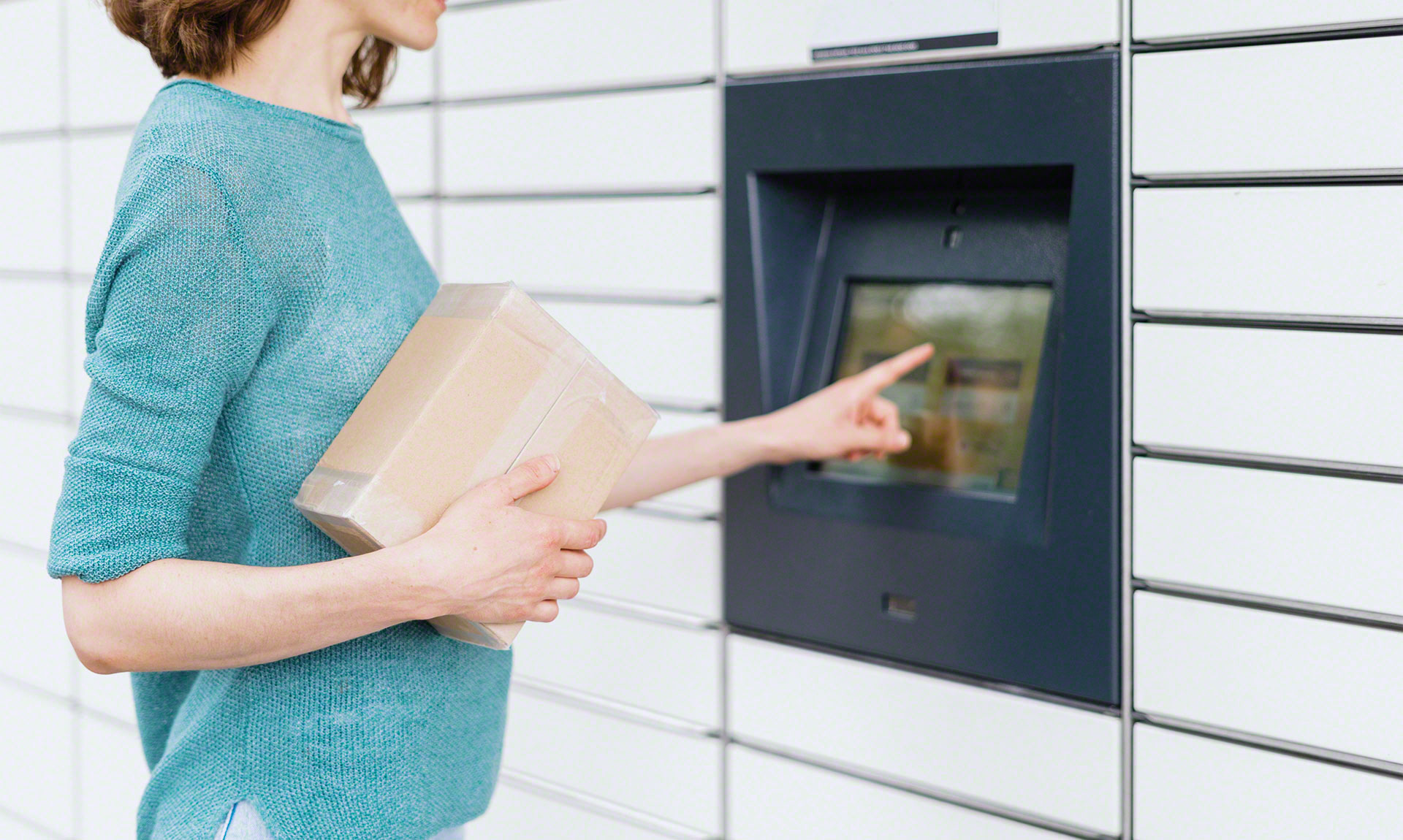 From the third-party logistics (3PL) provider’s point of view, they simplify the last-mile delivery process, reducing the typical number of miles traveled and trips made when a customer isn’t home. Consolidated shipments result in savings for 3PL companies. They’re also convenient for customers: the available time window is wide enough to retrieve the parcel, and the smart locker is usually located close to the customer’s home.

Smart lockers work 24/7, making pickup and delivery times flexible. Today, these lockers are used for many more purposes, e.g., for temporarily storing goods and for exchanging merchandise between people. Smart lockers may reduce the cost of home deliveries, as they are normally located in centric locations such as stores, offices, and near residential areas. One of the advantages of smart lockers is that they can be customized and cloud-based, providing options for parcel retrieval (Kum Fai Y. et al., 2019).

Smart lockers may reduce the cost of home deliveries, as they are normally located in centric locations such as stores, offices, and near residential areas

Digital lockers, which have been in use in the private sector for years, have also become a solution for governments to optimize mobility and urban transportation. As part of the Horizon 2020 program, the European Union has promoted the implementation of digital lockers through pioneering projects in different European countries. In Spain and Italy, for example, two smart locker applications have been developed to improve mobility in cities:

This pilot, conducted in Valencia, Spain, was designed under the framework of the European SPROUT project. It takes advantage of passenger traffic by dropping off parcels at pickup points in metro stations instead of sending them to customers’ homes. By implementing smart lockers in metro stations, delivery trips will be avoided, as a large number of parcels can be delivered with just one stop at the lockers installed.

In the case of Valencia, digital locker service was already available in some private locations — e.g., fuel stations, supermarkets, and residential buildings — but not in public spaces like the metro station. The study analyzed the optimal location for the lockers, considering, on the one hand, the preferences of potential users, and on the other hand, the technical criteria for their installation (electricity supply, Wi-Fi coverage, and positioning within the range of the security cameras installed in the metro station).

The study showed that the digital lockers enhanced the city’s mobility and helped to reduce traffic congestion and greenhouse gas (GHG) emissions. Specifically, these lockers promoted the use of the station as a parcel pickup point, thus reducing the number of last-mile vehicles in the city.

The digital lockers were operated as follows:

Valuable data were obtained from this pilot. They include the average miles traveled per parcel up to last-mile delivery, which can be assumed to be the miles saved by dropping off the packages at the digital lockers in the metro station.

According to the data collected, it was estimated that last-mile parcel delivery vehicles had an average emissions factor of 0.216 lb CO2/mi and an average distance traveled of 1.6 mi per parcel. In the two digital lockers set up in metro stations, the GHG emissions savings were 106.4 lb CO2 and 259 lb CO2, respectively. In general terms, the GHG emissions savings per digital locker in a year — handling 6,200 parcels/year — were about 8,680 lb CO2.

INDIMO is a European project that aims to ensure that all members of society can benefit from digital mobility services. The specific pilot with digital lockers aimed to bring a digital solution to a rural area of Bologna, Italy, to improve inclusiveness and extend several services to elderly people and foreigners in the community. Located far from urban centers, rural communities don’t have access to the same services compared to cities. The introduction of digital lockers has the potential to greatly improve the level of service in these communities.

The digital locker developed for the pilot featured parcel/correspondence shipping and delivery as well as bill payment and card recharging. This pilot test targeted users and was set up in a rural area.

In 2018, Bologna was characterized by an aging society, with 247,800 residents aged 65 or older (24.4% of the total). At the same time, the foreign population showed a positive trend. The selected location for the pilot was Monghidoro, a rural municipality about 25 mi from the center of Bologna, with a total population of 3,702 inhabitants and a population density of 29.5 inhabitants/mi².

Within this area, several indicators to measure the society’s level of inclusiveness were collected. They showed that 16% of the population didn’t have services within a 30-minute distance on foot, 28.5% never had used a computer before, and 67% of the population was at risk of poverty or social exclusion.

The objective of the pilot was to enable e-commerce in rural areas by introducing a model of digital locker already used in crowded areas/urban settings. The purpose was to make the digital systems more accessible and inclusive, targeting groups that are usually left out due to their location, while ensuring protection from cyberattacks. This pilot aimed to reach citizens that, for several reasons, couldn’t access the same services compared to city residents. The people affected included the elderly, foreigners or communities of foreign people living in low-level economic conditions, and people with a low level of education and digital knowledge.

The smart locker offered many services for users: shipment and collection of parcels, postal bill payment, and telephone card/prepaid card recharging. Users were able to access the digital locker through an app installed on their mobile devices (smartphone/tablet). It’s important to note that such a locker had never been tested in rural areas. Until then, it had only been installed in private buildings in urban centers.

The main challenges for the implementation of the digital locker were a poor understanding of new technologies and related services, low digitalization levels, and limited public transportation services in the area. The locker was expected to increase the number of and accessibility to basic services as well as e-commerce services.

The app's login/sign-up screen described the functions available on the digital locker: parcel collection and shipment (e-commerce and consumer), collection of signed correspondence, payment management, and management of locker cells for personal items. The main user operations are summarized below:

Dr. Susana Val is the Director of the Zaragoza Logistics Center (ZLC) in Spain. She is also an Associate Research Professor at the MIT-Zaragoza International Logistics Program, Research Affiliate at the MIT Center for Transportation and Logistics, and Principal Investigator for the Transport Research Group.